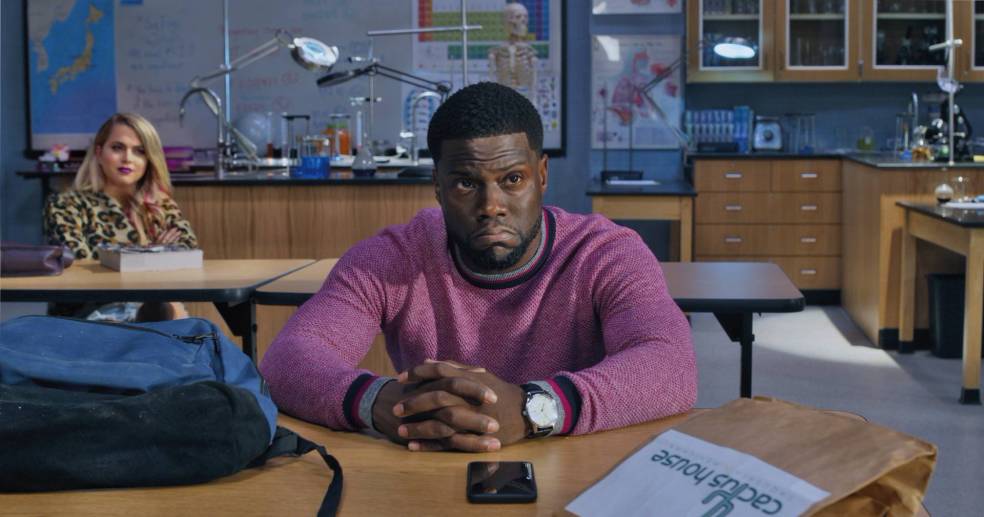 I just saw Kevin Hart and Tiffany Haddish’s ‘Night School’ (2018). Although I’m generally not a fan of self-deprecating comedy, especially by Black men (I feel society celebrates our failure to exhaustion as it is, why celebrate it more?), I found the story an exaggerated admission of the Black Male Dual Economy.

To be clear, Hart has always kind of dealt with Black male failure, female-initiated intimate partner violence (IPV), Black female entitlement, and society’s fetish with performed Black hypermasculinity, but the problem is he tells these stories from such a deplorable, self-deprecating space that I’ve long since stopped believing he’s doing it to help Black men as much as profiting from Black male underdevelopment.

Hart plays a social failure who dropped out of high school years ago and went into sales, but due to his own stupidity becomes unemployed. He buys status symbols he can’t afford and fakes successful (a Porsche and an upscale apartment) to attract a woman with whom he can’t provide financial parity.

Hart’s relationships with women in his comedy are usually the same: he plays an emasculated man-child who is psychologically & physically abused. He’s a deferential male who both competes with and is dominated by women…from his sister to his teacher to his love interest and even to her friends… His domination usually takes the form of a sort of mother/son dynamic, with Hart being disciplined by these women like a child. (He even gets a spanking from a woman in this film and asks to be tucked into bed by his mother). At this point, you can’t convince me he wasn’t abused by a woman at some point in his life.

By the end, it’s revealed that his character has (always had) multiple severe learning disabilities (that no one suspected he may have needed help with from K-12), while trying to do anything he can to maintain a relationship with a wealthy, elite woman while possessing no comparable skills. Here, keep in mind the same system that propelled many Black women into college relegated Black men to special education (and sports) and eventually prison, sometimes by fabricating learning disabilities that were really punitive practices designed to punish Black boys for not conforming to acceptable behaviors by polite (code for white) society. To get his next job, he needs a GED, which he attempts and fails at repeatedly until he finally passes. By the end, he’s a fast-food worker with a GED and confirmed learning disability who is poor, rides the bus, and learns to be honest about his condition and accept it.

I do here at least applaud the movie for suggesting that such Black men still deserve love and support, and I believe director Malcolm Lee had something to do with that. He, like Ryan Coogler, have love for Black men that can be seen in choice moments. One such moment was seeing Haddish’s character supportively working with a  Black male special education student, marking that they do at least take the issue somewhat seriously (if not but for a moment). And clearly, it needs to be…

Meanwhile, Yvonne Orji and Tiffany Haddish, entertainers of continental African origins, continue to profit from playing mean-spirited African American (even lesbian) women who embody anti-Black misandry—even when helping Black men (Hart’s character has to be beaten up by Haddish in order to learn, and he learns to accept his abuse as helpful). This is relevant because it is questionable whether Nigeria or Eritrea have cultures that have internalized such anti-Black misandry. If not, such performances become profane and morally problematic.

My main point is that this film makes light of a plight many Black men face: impoverished from generations of lack of wealth, exiled from society, low-skilled, learning disabled, hustling to survive (I define hustling as competing in society with no legal, socially acceptable skills to do so sustainably), no relationship with his father even though he’s in his life, and told their value is in the status symbols they can acquire (cars, money, and trophy-esque women). As a father, I hope Hart will at some point think about which types of narratives might be helpful to the social development of his kids, especially his sons.

As I acknowledge this day, the 9th anniversary of my wife’s passing, I’m moved to say that this film highlights for me what love is not. It’s time for the abuse, disposability, ridicule, social failure, disrespect, stereotypes of low intelligence, and social irrelevance of Black men to stop being a joke. It is time to call society’s appetite for such what it is, a sickness. Because the rates of despondent, homeless, imprisoned and suicidal Black men are increasing while these very men are mocked in our own media. And while one of my very best friends has been all four of those things in the last 6 months, I hope we can wake up before it’s too late, if it isn’t already.