Jordan Peele has a bright future in film. The directing, storytelling, and character-building alone was eery and off-putting, but the subject matter even more so. He also figured out how to get White folk to the theaters while performing brain surgery on race and gender in America. #Nice #Classic

Designed to highlight the socio-political isolation and feeling of a lack of deep support from even well-meaning White liberals, the film captures the strange space of being in their close proximity nonetheless. However, more than just the eeriness of dealing with Whites that demonstrate that they see you as less than their equal, what I appreciate about Peele’s vision is that I—-as have many of his assumed target audience of middle-class Black folk—-have gone to school, socialized, and (continue to) work with many of these people. Few films capture that eery space of being seen as entertainment, fetish, dangerous, and sexual exotic all at once…a position one remains locked in permanently with these folk.

I remember talking with a colleague of mine last year and she commented on how little Black men could relate to being a sexual object. I laughed out loud (which I find I do far more often the more I learn—-as opposed to cussing people out). I explained that although it may seem a privilege to have people of all stripes buy into stereotypes about Black male sexual virility and phallus size, it is ultimately a form of dehumanization and sexual objectification. People see you as a vehicle for their sexual desires and interests, not for who you are. That said, Black men’s sexual exploitation is vivid and pulsating, yet it’s played down and is thus invisible to most.

And yes, this can happen intraracially. Black folk can and do sexually objectify each other, but we only hear about how Black men objectify Black women. Generally focused on their sexual utility, Black women can speak at length about such experiences. However, they are often not as candid about anti-Black male intraracial sexual objectification, or rather, how Black men are sexually objectified in regard to their penis length, sexual prowess, color, class/career status, marriageability, financial resources, virility and assertiveness (read as manly), and much more, by Black women. Nevertheless, although not dealing with this issue in particular, the film nonetheless explores various types of black male sexual objectification, some more apparent than others.

One way Get Out takes this objectification to the next level is by showing us a science-fiction version of what I refer to as “symbolic cannibalism.” By that I mean that the film articulates a form of anti-Black male heterophilia* that seeks to adore, acquire, fetishize, and conquer the Black male body (it is hetero in that these bodies are used for the sexual gratification of White women). (*Black Male Heterophilia refers to the perverse desire to obtain and control Black male heterosexual bodies for the purpose of exploitation in heterosexual contexts.)

In essence, Black male bodies have been consumed by White society as a from of social cannibalism in myriad forms by multiple overlapping industries for generations.

The prison, entertainment, domestic terrorist (police/vigilante murderers), and electoral industries to be exact (both prisoners and the deceased have their names mis-used on voter rolls–see the documentary Unprecedented: The 2000 Presidential Election).

Do not get it twisted. This appropriation and consumption of mostly Black male bodies is sexism…and Black men have been hyper-subject to it for generations. In other words, this misandrist, racially-sexist, anti-Black male heterophobia ain’t new (defined by Dr. Ron Neal as “the constructed idea that heterosexual Black men are wicked, evil, and to be feared. This viewpoint is promoted by white heterosexuals, gay men, lesbians, and women. FYI: White heterosexuals are relieved from this perspective.” ) The film’s focus on acquiring Black male bodies is exemplary of this symbolically cannibalistic desire to control and usurp Black men as proxies for White authority (possession of their bodies to be used alternative to their own desires).

The White couple behind this appropriation of Black bodies in the film exemplify another interesting phenom simultaneously: the masculine and feminine roles played in White Supremacy. While the wife was the one who would hypnotize potential men acquired for proxy use (she also hypnotized a lesbian Black woman–often read as “masculine” in Western society), the husband was the one who performed the neurological surgeries that supplanted people’s personalities. Although the film’s distinction between the brain and the mind may not seem like much, they reflect the masculine and feminine components of both White patriarchy and White supremacy. Simply put, we masculinize the physical sciences and feminize the social sciences/humanities, and the couple exemplify this gender dynamic well.

Yet for the most part White women’s role in both endeavors has been historically downplayed, ignored, and sometimes even revised as oppressed alongside the enslaved Africans she co-owned and helped rule over. To be clear, White women, the second wealthiest demographic in America and thus the feminine component of White supremacy’s gendered infrastructure, played an integral role in the both the administrative maintenance of the plantation as well as in standardizing the moral trajectory of Western domestic space. This was neither innocent or benign. Rather, it was central to the internal integrity of the White slave-owning/elite family and framed the basis of the nation on both the familial and national levels.

One could argue that White women are the most protected demographic in America, as they benefit from White patriarchy in a unique manner that even White men do not: length of life. In the film, notice the reason that mainly Black men were sought after in the film:

White women outlive their husbands to such a degree that the men in the film had to be “reborn” in Black bodies to keep pace.

The life expectancies of each is noticeable in the societal sense, as women generally outlive men (approximately 5 years for Whites and 5-7 years for Black folk). According to the Centers for Disease Control and Prevention, the life expectancy of Black males has gone from age 60 in 1970 to roughly 72 by 2013, whereas Black women went from their 68 in 1970 to approximately 77 years old. This means that since Black lives have been used in service to Whites society (e.g. generations of incarcerated Black “sweatshop” laborers), Black lives create a living surplus for White lives when used as proxies for White interests.

As far neurological “brain-switching” is concerned in the film, this has long since been addressed in the Black community. Casually referred to as “Uncle Tomism/Aunt Janism,” this phenomena has been in use since slavery. The twist of course is that specific Whites live vicariously through Black bodies via brain matter transplants, a process allegorized through labor forces (such as slavery, incarceration, or sweatshop labor), entertainment (football, basketball, or rap), or even still video games that allow people to virtually “experience” Black criminality via animated avatars. Either way, Peele’s allegory is nevertheless prescient and realistic.

On a gender note, my observations are split along racial lines. For Black people in the film, the White grandfather (the runner) and grandmother (the woman our protagonist actually tries to save when he hits her with his car) usurp Black bodies and couple them against their will. The woman, a presumed lesbian, and the man had likely not met prior to their abduction. This hearkens back to the slavery era when enslaved Africans were forced to mate for both procreative and entertainment purposes. Here, their bodies are used for something more sinister, the longevity of White lives…yet slavery accomplished this same goal in a more abstract sense. It prolonged White lives through financing White society with centuries of unpaid, forced labor.

For Whites, I found it curious that the protagonist, even in self-defense, cannot be shown harming a White woman. In fact, only limited violence against women, no matter how villainous their behavior, is allowed in many Western films. Although I’m not advocating for male-on-female violence per se, it still highlights at least three things: first, the politics of gender in media that don’t allow women to be held accountable for their behavior. Statistically, women abuse men at roughly the same rates as men abuse women—-especially in the Black community, yet women are not sentenced to the same degree. Second, that women can never really be aggressors because they are innocent, always victims, and always right. This practice still occurs with Black women in media, but not to the degree of White women. Also, in horror contexts  such as those in Get Out where White women were dehumanizingly murderous, seeing our protagonist hurt them would make him a villain to the American visual imagination…even though he was defending himself! In fact, him showing the worst of them (his girlfriend) empathy and mercy made him even more humane, but when he killed White men he was heroic. My point? Whether innocent or guilty, (White) women’s innocence is paramount while men’s is conditional—-especially Black men. Third, the Western visual tradition suggests that Black men (and men in general) “deserve” whatever violence they receive from women—-as well as a lack of empathy for their endured pain. Here, Black men’s pain is merely part of the story, but women’s pain distracts us from the story and triggers our desire to protect them.

For example, remember the controversy over the XMEN: Apocalypse poster? Jennifer Lawrence’s “Mystique” was being choked by the villainous Apocalypse. 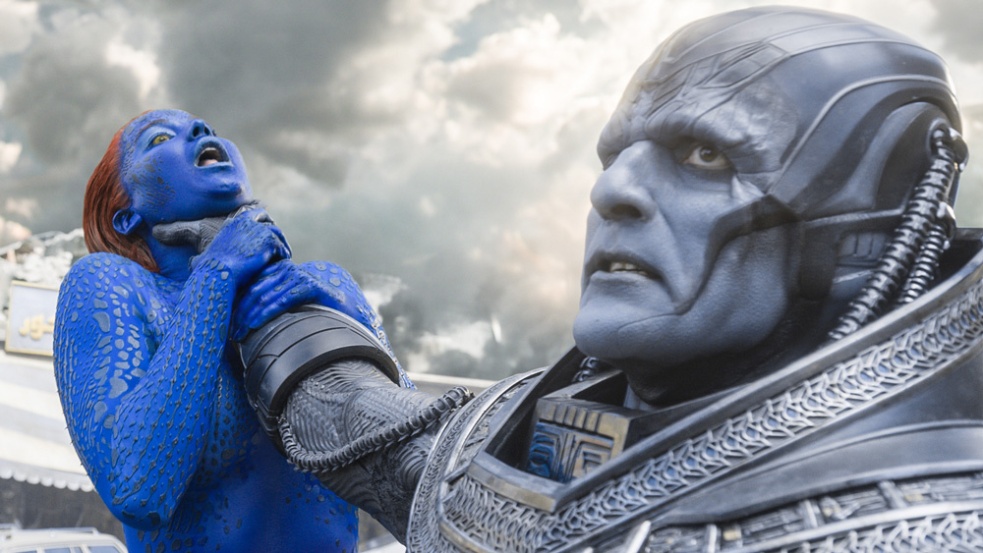 This triggered the ire of many feminists in that it affirmed violence against women (although her cutting his throat 30 seconds later in the film was irrelevant).

As I said, his violence was “political” and had real-world impact but her violence was merely “entertainment.”

As stated in other articles, Peele’s vision allows us to ponder Black men’s fears and allow them to be outwardly afraid while not denying them their humanity and manhood. Unfortunately, some are taking to punishing Black men for dating/marrying White women by suggesting that the film’s warns us against doing so. However, it should not be suggested that Black women cannot be threats to Black men’s freedom and safety. As Facebooker Love Dorsey acknowledges, black women can be proxies for whiteness through manipulation of the system too. That said, I wonder how this might have been allegorized in such a sci-fi context?

Addendum: Uplifting Black males is a movement for which this blog advocates and has several methods of achieving its endpoint. One is to improve on our assessment of white supremacy by adequately illustrating how Victorian conceptions of Western femininity play(ed) a crucial role in attacking Black communities. And when used by Black feminists, often erroneously misjudge black men for white men and underplay black male victimization while overplaying black male threat. Such a dynamic undermines our understanding of Black male fear due to psychological terrorism by either White society (or on a lesser level, psychological abuse by our own families and community). Acknowledging the forgotten yet potent aspects of White Supremacy can lead to better solutions, as they better define the problem (in this case not giving women a pass). But then again, that’s what feminism fought for right? Not only to benefit on equal terms as men, but to be held as accountable for their actions as men? We’ll know this goal has been achieved when women are sentenced for committing crimes at the same rates men are (something I’ve yet to see anyone march for), and when villainous women in films and TV shows can be defeated the way their male counterparts are…

One thought on ““‘Get Out’ of It More Than Just the Apparent: Assessing Jordan Peele’s Assault on White Liberalism and the White Gender Paradigm” by T. Hasan Johnson, Ph.D. ”