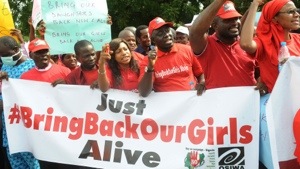 There’s been much ado lately about the missing 276 young women in Nigeria, and rightly so. The issues and challenges of girls and women are difficult in many contexts, but most especially in regions where imperialism and religious fundamentalism cross swords. In Nigeria, the rise of Boko Haram since 2009 (whose name means “Western education is forbidden” in the local Hausa language) as a terrorizing Islamic-Nationalist force has been devastating to say the least. Their self-initiated war against Western education has gone to great extremes and has resulted in their attacking Christians, women, and most especially girls. But I should add that they’ve also attacked other Muslims and boys. Why separate out these two categories? Because our media laden culture has desensitized us to the nuanced and fractured nature of human social groups. Despite former President Bush’s incredulous use of the term ‘terrorists,’ most Muslims are not terrorists and condemn violence, and are therefore as much victimized as anyone else… However, we tend to put all Muslims in the same boat. In similar fashion, we often overlook boys and men when it comes to gendered atrocities, as their deaths become assumed and invisible, and they are strictly labelled as aggressors, a lazy analysis to say the least. Whether it’s a civil unrest or an outright war, male death is expected.

In relation to the recent issues in Nigeria, it’s becoming fashionable to condemn Boko Haram and cry out “bring back our girls!” much the way people jumped on the bandwagon to attack Donald Sterling. But again, as Bomani Jones brilliantly points out about Sterling, this ain’t new. Not with Sterling, nor with Boko Haram. In fact, Boko Haram is said to have killed as many as 3,000 people since 2009, but the international outrage has been strangely missing. It’s been recently reported that, “In an hour-long video obtained by Agence France-Presse, a man identifying himself as Boko Haram’s leader, Abubakar Shekau, claimed responsibility for the abductions and threatened to make the girls slaves. He states, “By Allah, I will sell them in the marketplace,” he says in the video, in which he refers to the captives as his slaves. The video showed militants firing rifles in the air and crying, “Allahu akbar!” or “God is great.”

Activists for both women’s rights and African social justice issues are somewhat elated that people are finally paying attention and yet disgusted about the opportunistic way these issues are being dealt with. On the one hand, the abduction and rape of these girls is both reprehensible and deserves attention, yet on the other, such random suffering can be found in many places that get little global attention–even in America. Women across the African continent have experienced similar atrocities without mention, and many of these issues can still be traced to colonialism, globalized COINTELPRO-esque practices, and neocolonial structures that continue to extract much needed resources out of Africa to Western banks to underdevelop indigenous governments (and elections), leaving the people fighting for scraps.

In terms of the gendered angle this issue has taken, it has been valuable in shifting attention to Nigerian women’s issues, influenced by the Pakistani teenager Malala Yousafzai, an activist who survived a Taliban assassination attempt, speaking up for the missing girls in an interview with NBC News. Reports indicated that “On April 14, militants with the Islamic fundamentalist group Boko Haram reportedly attacked the Government Girls Secondary School in the northern Nigerian town of Chibok and kidnapped nearly 300 girls.” The posted image of First Lady Michelle Obama advocating for the Nigerian girls also brought this issue some needed attention, but unfortunately offered little in terms of historical detail or gender accuracy. Here, the much needed attention on Nigeria now focuses on enslaved girls, rendering the experiences of murdered boys, school faculty and staff, Muslims, Christians, and innocent Nigerian citizens invisible.

As far as current discussions go, men are either complicit, incompetent, uncaring, or exploitive. We are complicit in that Boko Haram’s terrorists seem to be mainly men. We are incompetent and uncaring in that the Nigerian government is said to be slow and un-empathetic. President Barack Obama’s call to action (as well as Kofi Annan’s support) are reflective of male public officials who only act out of political necessity. Or, they are exploitive imperialists using this opportunity to further subjugate Africa. Yet what many ignore is that the false gender binary between men and women (perceived as men versus women) overlooks how males have been killed. In other words, reports suggest that as Nigerian girls have been taken (likely across national borders), while boys have been killed outright, yet the murder of boys brought little attention. Why? Well, in part, it’s because males and violence are viewed as synonymous. We expect it. But we also don’t discuss how males have also participated in protests, and have also lost family in these Boko attacks…and have, too, been traumatized by it. It is hoped that the feminization of the violence will trigger in us a protection mechanism, and a call to action. Here, I think of the reporting of female soldiers killed or injured in American insurgent missions and the sympathy extended to them, yet for men it’s all part of war.

Let me be clear. I’m not complaining that women are getting all the love and men are being ignored. I’m merely suggesting that males and death are viewed as “expected collateral damage,” while girls are either ignored altogether or heavily sympathized over when victimized. In other words, the gender vocabulary in news media over Black males and females is encoded with assumptions about male/female worth, and much of the time male worth is not described as gendered at all. Gender representation (and experiences) are fraught with both privileges and oppressions simultaneously. We learn to talk about privilege and oppression as a zero-sum game that either we have or don’t. Yet in communities that have historically been oppressed, it’s never quite that simple. For African American males, privilege and oppression are consistently linked. We know who Emmet Till is (and a handful of others who have come later), and that IS a form of privilege–the fact that we know about them at all while not knowing about the many victimized Black females. Yet:

1) Such knowledge brought none of the families justice (from Till to Jordan Davis).

2) Our awareness of high profile victims often distracts from thousands of killed/arrested Black males accosted daily. In other words, we haven’t found an effective way to translate empathy for one victimized Black male to the many oppressed in much the same way…daily. (In fact, I use to have students in my classes gather information on how many Black men were killed every year in America, and in a class of 40 or so, each student would often come back with a person I hadn’t heard about!).

So the privilege of a few victims being known is still linked to the oppression of Black masculine bodies. Even in the gendered reporting about Africa (in this case Nigeria), oppressions and privileges are warped into a sad, tragic kind of dynamic where African boys are either killed outright or threatened into joining a militia (so far this is not reported to be happening with Boko Haram, but has happened in other places). Girls on the other hand are taken and raped and sold into slavery/forced marriage. The privilege for girls? They live, but it’s a life without agency and filled with ongoing sexual violence. The privileges for boys? They live only as long as they participate in militia violence (and again, in Nigeria, that option is not reported to have happened, so Nigerian boys are just killed). Reports indicate that on February 25, 2014, 59 boys were burned alive in a Nigerian school by Boko Haram without public outcry. Other boys were shot while escaping and later died from their wounds. Essentially, since 2009, Boko Haram’s murderous rampages have been gendered differently toward both girls AND BOYS.

Thus my goal in writing this piece is that the violent, patriarchal abuse of power exhibited by Boko Haram simultaneously oppresses female AND male bodies similarly and yet differently (especially when bolstered by white supremacist capitalism). Boys are sought after in patriarchy to replicate oppressive masculinities, yet simultaneously disposable in that they can be killed outright without public notice…or forced/lured into patriarchal violence (often for social capital). Girls are sought after to be raped and enslaved, their value determined by their service and reproductive utility. In essence, we all have shifting privileges and oppressions, yet few of us commit ‘privilege suicide,’ where we purposefully renounce our access to raced, colored, classed, gendered, sexualized, and ‘healthed’ (able-bodied) privileges (both real and symbolic). Put simply, how many of us are willing to do the complex work of exploring the interlocking structures of privileges and oppressions in gendered Black communities–where ‘gender’ also applies to males–and absolve ourselves of the various privileges that come with it? I’ll have my answer if the imperative moves from, “Bring back our girls” to “Bring back our girls AND arrest Boko Haram for killing our boys.”